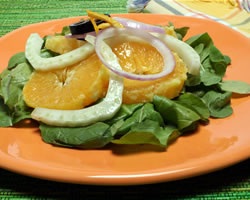 Europeans have long appreciated fennel, and Americans have now begun to acquire a taste for the celery-like vegetable with the feathery fronds that resemble dill.

Raw or cooked, fennel has an anise-like flavor that nicely complements many foods. The licorice flavor becomes lighter when the fennel is cooked.

Fennel not only adds variety and taste, but can be a good part of a health-protective diet. For example, fennel contains flavonoids, natural antioxidant plant compounds that seem to lower the risk of both cancer and heart disease. The beta-carotene in fennel is a powerful antioxidant believed to help reduce the risk of cancer, enhance immunity and prevent cataracts.

Because it has only 13 calories in a half-cup serving, fennel is a great way to add interesting flavor and texture to meals in a weight-conscious way.

The pale green stems and fronds are attached to the top of the broad fennel bulb. What the French and Italians knew before us is that the bulb and stems of raw fennel can be chopped like celery and added to salads, stews, stir-fries and other main dishes. They also can be sautéed in a bit of olive oil and served as a side dish.(The fronds are usually reserved for garnish.)

If using fennel raw, slice the bulb into thin wedges or slices. To grill or roast, halve the bulb vertically and you will see a triangular, hard core. Using a small, sharp knife, cut out most of the core, leaving enough to keep the layers attached while cooking.

More from our magazine:  Quinoa Salad
[1]

When buying fennel, you may see it sold by its Italian name, finocchio. Look for bulbs that have firm stalks, bright green fronds and no discoloration.

Fennel pairs well with many vegetables and fruits. A salad made with fennel and oranges, peppery arugula, red onion and black olives is refreshing and flavorful.