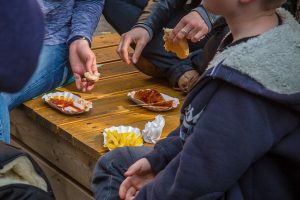 A new report on American eating habits reveals that almost a quarter of the calories we consume come from nutrient-poor selections – better known as “junk food.”

This surprising fact clashes with the advice of many nutrition experts on how to eat more healthfully and control weight.

To counteract the effect of escalating portion sizes, many experts recommend decreasing the amounts of the foods we eat.

But if one-fourth of what we eat is junk food, weight reduction campaigns should emphasize eating differently, not just eating less.

The new report is based on surveys of about 4,700 people. According to the responses, soft drinks are the number one source of calories. They accounted for 7.1 percent of the calories these people consumed in 1999-2000.

Altogether, the categories of soft drinks, sweets and desserts, and alcoholic beverages contributed 23.8 percent of the calories that these survey respondents consumed. Salty snacks and fruit-flavored drinks added another five percent of calories.

Since these foods are relatively concentrated in calories, you don’t have to eat a lot of them to increase your daily calorie total.

Another study looking only at youths aged 8 to 18 reports similar findings. Candy, table sugar, sweetened drinks, baked and dairy desserts, salty snacks, fatty foods like butter and gravy, along with some other nutrient-poor foods made up more than 30 percent of the calories these youths consumed.

In fact, desserts and table sweeteners alone comprised almost 25 percent of the total calories. Furthermore, those who ate the most junk food tended to eat the least amount of nutrient-dense, healthful foods. They took in less vitamins A, B-6 and folate, as well as calcium, magnesium, iron and zinc.

More from our magazine:  Hopping Back on the Diet Wagon
[1]

Although both of these studies are based on large national surveys, they included larger than representative proportions of blacks, Hispanics and low-income individuals. Consequently, the results may poorly characterize the eating habits of the average U.S. population.

However, a third study, which used a randomly selected group, confirms that people who eat a lot of junk food suffer nutritionally.

This study looked at the impact of salty snack foods, like potato chips, corn chips, crackers, pretzels and cheese curls. Those who ate the most of these high-fat salty snack foods had diets high in total and saturated fat and low in fruits and vegetables.

These people scored poorly for dietary healthfulness. Other people who ate more fat-free versions of these snacks tended to eat more fruits, vegetables and fiber. But even fat-free snacks, when heavily consumed, can be detrimental to your health because of too many calories.

The amount of sodium consumed by heavy users of both regular and fat-free snack foods also went well beyond recommended limits.

These three studies of nutrient-poor food consumption highlight several important messages. Between-meal snacks and drinks may be the best place to start substituting healthy choices and cutting back.

Second, people who are overweight can still be undernourished. Eating more healthful foods may be an important goal for these people, too.

Finally, these studies and others like them refute the commonly heard idea that as long as someone maintains an appropriate weight, junk food is OK. Eating substantial amounts of high-calorie, low-nutrient foods tends to be part of an eating pattern that ignores nutrient-rich vegetables, fruits, whole grains and beans.

More from our magazine:  Cognac-Laced Truffles
[2]

Even if you don’t gain weight with this eating pattern, it could increase your health risks, like the risk of cancer, by depriving you of protective nutrients and phytochemicals.