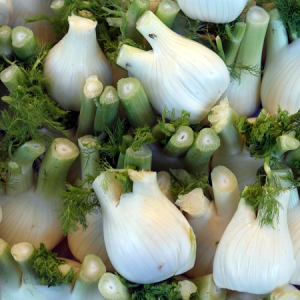 When I was growing up, my family, fond of nicknaming foods, dubbed fennel "Pinocchio." We picked this name because it sounds like finocchio, the Italian name for this celery-like white and green vegetable. To my young eyes, fennel looked like the cartoon puppet's elongated nose after he told a lie.

Once an ethnic and seasonal ingredient found only at Italian greengrocers from September to May, fennel now appears in many supermarkets through most of the year. Its distinguishing licorice or anise flavor was considered an acquired "gourmet" taste. Frankly, since it became widely available, I think the chubby bulbs that reach stores are milder tasting than the more pronounced flavor of the fennel I tasted in Italy, France and Greece. For this more intense flavor, check out the slimmer, greener bulbs sold at many farmers markets.

Raw fennel can be fibrous so, if serving it in salads, use a sharp knife to slice it thinly, either vertically or horizontally into thin strips. Cooking quite transforms fennel's flavor and texture. Whether you braise fennel in broth, blanch and then grill it, or simmer fennel in a stew or soup, its licorice taste mellows to a pleasant sweetness with a hint of anise. Cooked fennel loses its fibrousness yet holds its shape no matter how long, or how, it is cooked. In stir-frying or on the grill, it remains white and crisp. But oven-roasted or simmered with liquid, it turns a translucent golden beige that communicates its warm flavor.

More from our magazine:  Coenzyme Q10: Should You Take This Supplement?
[1]

Fennel is most often associated with Mediterranean-style dishes, such as this quick sauté, which also includes cannellini beans and chicken. You can also stir-fry it with peppers, red onion, tofu and curry powder. In winter, fennel goes well with root vegetables. For the holidays, try baking thinly sliced fennel layered with sliced apple, sweet potatoes, dried cranberries and cider.

Chicken with Fennel and Red Peppers