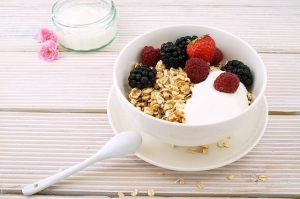 What can fiber do for you? Numerous epidemiologic (population-based) studies have found that diets low in saturated fat and cholesterol and high in fiber are associated with a reduced risk of certain cancers, diabetes, digestive disorders, and heart disease.

However, since high-fiber foods may also contain antioxidant vitamins, phytochemicals, and other substances that may offer protection against these diseases, researchers can’t say for certain that fiber alone is responsible for the reduced health risks they observe, notes Joyce Saltsman, a nutritionist with FDA’s Office of Food Labeling.

“Moreover, no one knows whether one specific type of fiber is more beneficial than another since fiber-rich foods tend to contain various types,” she adds.

Findings on the health effects of fiber show it may play a role in:

A 1992 study by researchers at Harvard Medical School found that men who consumed 12 grams of fiber a day were twice as likely to develop precancerous colon changes as men whose daily fiber intake was about 30 grams.

The exact mechanism for reducing the risk is not known, but scientists theorize that insoluble fiber adds bulk to stool, which in turn dilutes carcinogens and speeds their transit through the lower intestines and out of the body.

The evidence that a high-fiber diet can protect against breast cancer is equivocal. Researchers analyzing data from the Nurses’ Health Study, which tracked 89,494 women for eight years, concluded in 1992 that fiber intake has no influence on breast cancer risk in middle-aged women. Previously, a review and analysis of 12 studies found a link between high fiber intake and reduced risk.

In the early stages, some breast tumors are stimulated by excess amounts of estrogen circulating in the bloodstream. Some scientists believe that fiber may hamper the growth of such tumors by binding with estrogen in the intestine. This prevents the excess estrogen from being reabsorbed into the bloodstream.

More from our magazine:  Exercise For Elders: It's Never Too Late
[1]

Because insoluble fiber aids digestion and adds bulk to stool, it hastens passage of fecal material through the gut, thus helping to prevent or alleviate constipation. Fiber also may help reduce the risk of diverticulosis, a condition in which small pouches form in the colon wall (usually from the pressure of straining during bowel movements).

People who already have diverticulosis often find that increased fiber consumption can alleviate symptoms, which include constipation and/or diarrhea, abdominal pain, flatulence, and mucus or blood in the stool.

As with cholesterol, soluble fiber traps carbohydrates to slow their digestion and absorption. In theory, this may help prevent wide swings in blood sugar level throughout the day.

Additionally, a new study from the Harvard School of Public Health, published in the Feb.12 issue of the Journal of the American Medical Association, suggests that a high-sugar, low-fiber diet more than doubles women’s risk of Type II (non-insulin-dependent) diabetes.

In the study, cereal fiber was associated with a 28 percent decreased risk, with fiber from fruits and vegetables having no effect. In comparison, cola beverages, white bread, white rice, and french fries increased the risk.

Clinical studies show that a heart-healthy diet (low in saturated fat and cholesterol, and high in fruits, vegetables and grain products that contain soluble fiber) can lower blood cholesterol. In these studies, cholesterol levels dropped between 0.5 percent and 2 percent for every gram of soluble fiber eaten per day.

As it passes through the gastrointestinal tract, soluble fiber binds to dietary cholesterol, helping the body to eliminate it. This reduces blood cholesterol levels, which, in turn, reduces cholesterol deposits on arterial walls that eventually choke off the vessel.

There also is some evidence that soluble fiber can slow the liver’s manufacture of cholesterol, as well as alter low-density lipoprotein (LDL) particles to make them larger and less dense. Researchers believe that small, dense LDL particles pose a bigger health threat.

More from our magazine:  Tuscan Chicken Breasts with Polenta
[2]

Recent findings from two long-term large-scale studies of men suggest that high fiber intake can significantly lower the risk of heart attack. Men who ate the most fiber-rich foods (35 grams a day, on average) suffered one-third fewer heart attacks than those who had the lowest fiber intake (15 grams a day), according to a Finnish study of 21,903 male smokers aged 50 to 69, published in the December 1996 issue of Circulation. Earlier in the year, findings from an ongoing U.S. study of 43,757 male health professionals (some of whom were sedentary, overweight or smokers) suggest that those who ate more than 25 grams of fiber per day had a 36 percent lower risk of developing heart disease than those who consumed less than 15 grams daily.

In the Finnish study, each 10 grams of fiber added to the diet decreased the risk of dying from heart disease by 17 percent; in the U.S. study, risk was decreased by 29 percent.

These results indicate that high-fiber diets may help blunt the effects of smoking and other risk factors for heart disease.

Because insoluble fiber is indigestible and passes through the body virtually intact, it provides few calories. And since the digestive tract can handle only so much bulk at a time, fiber-rich foods are more filling than other foods–so people tend to eat less. Insoluble fiber also may hamper the absorption of calorie dense dietary fat. So, reaching for an apple instead of a bag of chips is a smart choice for someone trying to lose weight.

But be leery of using fiber supplements for weight loss. In August 1991, FDA banned methylcellulose, along with 110 other ingredients, in over-the-counter diet aids because there was no evidence these ingredients were safe and effective.

The agency also recalled one product that contained guar gum after receiving reports of gastric or esophageal obstructions. The manufacturer had claimed the product promote a feeling of fullness when it expanded in the stomach.