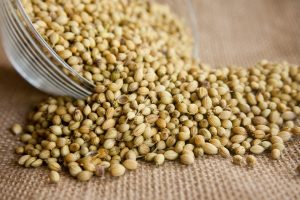 Few foods are as uniquely diverse as coriander, the plant that supplies both a spice and an herb. Its beige seeds are used as an aromatic spice in Europe, Asia, North Africa and the Middle East. The pungent green leaves, used widely as an herb from China to Mexico, inspire either love or intense loathing. Coriander has multiple names, including Chinese parsley and cilantro, a Spanish variation of the word culantro, which are usually applied only to the leaves. The leaves resemble flat-leaf parsley, although at farmers' market I have seen locally cultivated coriander as large and frilly as a bouquet, with delicate little pink and white blossoms.

Thanks to its popularity in Latin American, North African, Middle Eastern and Asian cooking, cilantro tends to be more familiar than coriander seed. We use it all the time, in salsa, chili, on salads and to garnish soups. Thai cooks even use the brownish, carrot-like root sometimes left at the base of cilantro clusters.

Coriander seed, which resembles white peppercorns, is used whole and ground. Its complex flavor is sweet and faintly resinous, with citrus notes. The whole seed is used in pickling spice, crab boil and for making poached fruit. Ground coriander is important in Indian curries, Ethiopian berbere, and for flavoring baked goods like cookies and gingerbread. It is also used to flavor gin and in perfumes, thanks to its essential oil, linallol. Medicinally, coriander and cilantro both help digestion and may be anti-bacterial.

More from our magazine:  A Colorful Shrimp Stir-Fry
[1]

Bringing cilantro and coriander together, I use them both in a burrito combining the flavors of India and the American Southwest.