Sprouts--those crunchy, healthy newborn plants often associated with the hippie days of the 1960s--have in this decade become regulars in salad bars and produce departments across the country. But along with their increasing presence has come an increasing frequency of sprout-related food-borne illness.

The federal government has linked the most common kind--alfalfa sprouts--to a number of food-borne disease outbreaks, most occurring since 1995. The disease culprits included the bacteria Salmonella and Escherichia coli O157:H7, a particularly dangerous pathogen.

These outbreaks led the Food and Drug Administration in August 1998 to issue a health advisory for high-risk groups warning them not to eat raw alfalfa sprouts and, in September, to conduct a public hearing to determine what further steps, if any, are needed to ensure the safety of sprouts.

"There are some interesting questions raised about sprouts," says Karen Hulebak, a science policy analyst in FDA's Office of Policy. "What do we know about the source of sprout contamination? What should consumers do? ... There are a lot of uncertainties."

Sprouts, which are the germinating form of seeds and beans, are easy to produce. They require no soil, only water and cool temperatures. They emerge in two to seven days, depending on the type of seed or bean. In addition to raw alfalfa sprouts, other varieties include clover, sunflower, broccoli, mustard, radish, garlic, dill, and pumpkin, as well as various beans, such as mung, kidney, pinto, navy and soy, and wheat berries. Many are sold individually, some in mixtures.

Potomac Glen Farms in Potomac, Md., sells a wide array. Each offers a distinct flavor, suggesting, as sprout growers like to point out, that sprouts indeed work well in a variety of dishes, such as soups, salads, sandwiches, and stir fries. Nancy Snider, owner of Potomac Glen Farms and president of the International Sprout Growers Association, says one of her favorite foods is sprouts with peanut butter and crackers.

While versatile, sprouts also are favored for their nutritional value. Like other fresh produce, sprouts are low in calories and fat and provide substantial amounts of key nutrients, such as vitamin C, folate and fiber. A 1997 Johns Hopkins University study suggested raw broccoli sprouts may be particularly rich in sulforaphane, a compound that may mobilize the body's natural cancer-fighting resources and reduce the risk of developing cancer.

Though popular in this country in only the past few decades, sprouts have actually been around for thousands of years. Mung beans have been used in Chinese foods for years--though usually in cooked dishes.

Today, sprouts in the United States are a $250-million market. Some 475 U.S. sprout growers produce 300,000 tons of sprouts every year, according to the International Sprout Growers Association. As many as 10 percent of Americans eat sprouts regularly.

Sprouts have only recently emerged as a recognized source of food-borne illness. Since 1995, health officials have attributed 13 food-borne disease outbreaks worldwide to sprouts. Ten of these outbreaks occurred in the United States, resulting in illnesses in at least 956 Americans and at least one death.

Four of the outbreaks were caused by E. coli bacteria, and three of those involved the most dangerous strain, E. coli O157:H7. The biggest outbreak occurred in Japan in 1996; 9,000 people were sickened and 17 died after eating radish sprouts contaminated with E. coli O157:H7.

The O157:H7 strain produces toxin in the human gut that damages cells of the intestinal lining. This allows blood to pass into the stool. Other symptoms of O157:H7 infection are stomachache, nausea and vomiting. Infection can lead to hemolytic uremic syndrome (HUS), a major cause of acute kidney failure in children in this country. HUS is fatal in about 3 to 5 percent of cases.

In people, Salmonella can cause salmonellosis, an illness characterized by fever, stomach cramps, and diarrhea. The illness can last as long as seven days, and severe cases may require hospitalization. In some people, it can cause death. A small number of illnesses may develop into recurring joint pain and arthritis.

Where do these bacteria come from? It's believed that the seeds from which sprouts are derived are often the source. Some of the seeds may become contaminated by animals in the field or during post-harvest storage, for example. Also, the use of animal manure in fields of alfalfa intended for nonhuman use may be a problem if seed is used for sprouting.

The ideal conditions provided by germinating seeds and beans--namely abundant nutrients in this phase of plant growth, high levels of moisture needed to produce sprouts, and heat generated from the sprouting process--help ensure the survival and growth of bacteria. "In the sprouting environment, bacteria can grow quickly," says Robert Wick, Ph.D., a plant pathologist with the University of Massachusetts and one of the presenters at FDA's September 1998 public hearing on sprouts.

So far, mishandling of sprouts during production, packing or distribution has not been implicated as the source of sprout contamination. However, bacteria already present in the sprouting seed can continue to thrive in conditions in which poor food handling techniques are practiced--for example, lack of refrigeration, infected workers, and dirty and unsanitary sprouting facilities.

Following three 1998 food-borne disease outbreaks involving raw alfalfa sprouts, FDA in August reaffirmed a warning that had been issued by the national Centers for Disease Control and Prevention in 1997. The advisory urged people at high risk for severe food-borne disease--children, the elderly, and people with compromised immune systems--to avoid raw alfalfa sprouts until methods to improve the safety of sprouts can be identified and put in place.

In September, the agency held a two-day public meeting on sprout safety to learn, among other things, possible preventive measures to ensure safe sprouts. Representatives from the sprout industry and consumer groups, as well as scientists and regulators, presented information to the Fresh Produce Subcommittee of the National Advisory Committee on Microbiological Criteria for Food.

High on the list of possible strategies was decontamination of sprout seeds. The most promising method is chemical treatment with calcium hypochlorite. It already is in use in California on an emergency basis, as approved by the state's environmental protection agency. FDA is working with the U.S. Department of Agriculture to get the treatment approved by the U.S. Environmental Protection Agency, which oversees use of chemicals on raw agricultural products, such as sprout seeds.

Irradiation, in which a measured dose of ionizing radiation is applied to a food product, appears to work well in decontaminating sprout seeds, especially when used in conjunction with calcium hypochlorite. Irradiation of sprout seeds would require FDA approval.

Heat treatment (the same as pasteurization) has limited appeal because there is such a fine threshold at which bacteria can be killed and germination not destroyed.

Other preventive measures would focus on production and distribution of sprouts. Possibilities include mandatory Hazard Analysis and Critical Control Point (HACCP) programs for sprout growers. HACCP focuses on identifying and preventing hazards, such as bacterial contamination, rather than relying on spot-checks of production processes and random sampling of finished products. Emphasis on good agricultural and manufacturing practices of sprouts also may help reduce the incidence of sprout-related food-borne disease outbreaks. Another option might be to include a list of safe handling practices or a mandatory warning on labels of sprout packages. The warning would echo FDA and CDC recommendations for high-risk groups.

According to LeAnne Jackson, Ph.D., a science policy analyst in FDA's Center for Food Safety and Applied Nutrition, the National Advisory Committee on Microbiological Criteria for Food was awaiting the subcommittee's recommendations at press time. If endorsed, the recommendations will be forwarded to FDA for consideration.

In the meantime, the International Sprout Growers Association planned to begin in November 1998 a voluntary quality assurance program in which sprout growers agree to follow ISGA-established sanitation guidelines based on good manufacturing practices. According to ISGA president Snider, sprout growers that participate could label their products as ISGA-certified as long as their facilities pass inspection by a third-party auditor.

The sprout industry also is working with the National Center for Food Safety and Technology--a consortium of government, industry and academia devoted to food safety research--in Summit-Argo, Ill., to study sprout safety. The center is conducting a six-month research project to verify the effects of chemical, heat and irradiation treatment of seeds on sprout safety.

Snider says the industry is involved because it wants to reduce any hazards associated with sprouts. "This is a difficult time for us," she acknowledges. "But out of difficulties, something good can come. We expect [these concerns over sprout safety] to turn out to be our best friend. We want our products to carry zero risk." 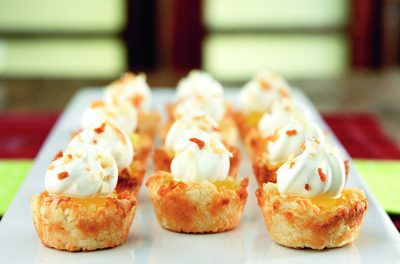 Easter Desserts and Sweet Treats for Your Diabetic-Friendly Menu