The first documented reference to tea, according to the Tea Council of the U.S.A., came in 350 A.D., when the Chinese scholar Kuo P'o described "k'u t'u" as a medicinal beverage "made from the leaves by boiling."

In his book All About Tea, William H. Ukers cites other references from China in the first millenium that ascribe to tea the healing powers of a virtual wonder drug:

The seventh century medical book, Pen ts'ao, proclaims that tea quenches thirst, lessens the desire for sleep, and "gladdens and cheers the heart." Even today, no one would take great exception to that, but the book goes on to pronounce the drink good for tumors or abscesses about the head, ailments of the bladder, inflammation of the chest, and dissipating heat caused by the phlegms. And the eighth century Ch'a Ching, or Tea Classic, written by the Chinese scholar Lu Yu, contains this prescription for children: "Bitter ch'a [tea] made with the rootlets of onions can cure children who are frightened and tumble without apparent causes."

Although these early claims have not been validated by 20th century science, recent studies do show some evidence that polyphenols--chemicals in tea with antioxidative and other biochemical properties--may, in fact, have value in protecting against some serious ailments.

Because they are processed differently, green and black tea have slightly different chemical makeups. Both contain polyphenols, however, and both have shown positive results in laboratory studies.

In a review article published in the July 7, 1993, issue of the Journal of the National Cancer Institute, Chung S. Yang, M.D., of Rutgers University in New Jersey reports that "many laboratory studies have demonstrated inhibitory effects of tea preparations and tea polyphenols against tumor formation and growth." The studies, though not conclusive, are intriguing.

Results of epidemiological studies are murkier. Some indicate a protective effect of tea against certain cancers, others show no relationship, and still others show a higher incidence of some cancers, particularly esophageal, in heavy tea drinkers.

Although higher rates of esophageal cancer are seen in some parts of China, Iran and Japan, where tea consumption is high, it's not clear why. According to FDA research chemist Joseph M. Betz, Ph.D., "It's been bounced back and forth as to whether the high incidence is due to tea polyphenols or to proliferation of esophageal cells in response to physical damage to those cells cause by habitual consumption of a very hot beverage, as has been proposed by Dr. Bruce Ames at the University of California at Berkeley."

He concludes that tea may reduce cancer risk in certain populations, adding that, "Depending on the etiology [cause] of the disease, the protective effect may be observed in selected cancers in certain populations but not in other situations." He advocates more studies on the chemical properties and biologic activities of tea and tea components--particularly of black tea, which is the major kind of tea consumed in Western countries and whose properties, he says, are poorly understood.

Polyphenols in tea are being looked at for a potential to lower heart disease risk also. Biochemist Joe Vinson, Ph.D., at the University of Scranton in Pennsylvania, found that hamsters fed green and black teas had lowered blood cholesterol levels and reduced LDL cholesterol oxidation. He also found that tea has an anti-clotting effect in rats, which could help prevent or reduce the severity of a heart attack.

Vinson is cautious about translating the results of his studies to humans, though, in part because the hamsters were given tea in amounts equivalent to two quarts a day for humans. And although he is encouraged by epidemiological studies in Japan and China that show less heart disease in people who drink lots of tea, he stresses that "the tea story has yet to be written as far as heart disease goes."

"People don't just live on tea," he points out, "and if you compare cultures, they differ in so many respects. To me, you have to fall back on the biochemistry--you want to know if polyphenols are antioxidants, if they are absorbed, and can you get direct evidence that they're effective against coronary disease."

"The Food and Drug Administration has not done any reviews of possible beneficial effects of tea," says John Vanderveen, Ph.D., director of FDA's Office of Plant and Dairy Foods and Beverages. "If we were to do it, it would be under the context of a health claim," he says, "and no one has submitted a request for a health claim."

Whether or not tea will ultimately prove of value in combating cancer, heart disease, or children's tumbling remains to be seen. In the meantime, cuppa tea, anyone?

Appears courtesy of the FDA 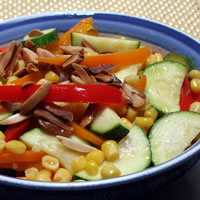 Springtime Is Prime Time For Artichokes