A Healthier Spin on Chicken Salad 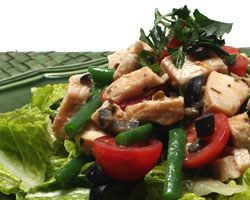 Enjoy a wonderful fresh chicken salad without the added fat (and attendant guilt) of mayonnaise. This week's recipe features the nutritional value of chicken, tomatoes, and beans and the flavor of oregano, olives and capers.

The venerable chicken was domesticated in what is now Vietnam about 10,000 years ago. Today it is one of the most common and widespread domestic animal with a worldwide population of approximately 24 billion birds. It has a neutral flavor that tends to take on the seasonings used in a recipe. Hence, the expression "tastes like chicken," so commonly used to describe other food.

Chickens are an affordable, nutritionally rich meat source and, when paired with ingredients like oregano and lemon juice, they take on a pleasing flavor. The addition of capers creates another layer of taste and texture.

Capers are a flavor enhancer that have been part of Mediterranean cuisine for thousands of years. Long ago, they were used as informal currency among merchants traveling the ancient trade routes. Capers are actually immature buds picked from a small bush. They are traditionally sun dried and brined in vinegar. (If the blossoms are not harvested, they will often turn into berries that look somewhat like olives.) For this recipe, they impart an intense, somewhat salty flavor. Many chefs recommend placing them in a small strainer and rinsing them under running water before adding them to the recipe. This reduces the salt, but still maintains the flavor.

More from our magazine:  Go Asian With A Meatless Satay

The cherry tomatoes provide another layer of texture and fresh taste with a subtle measure of sweetness. Remember, as with all tomatoes, avoid storing them in the refrigerator. These tomatoes, which are actually a berry, will retain their flavor and texture qualities if stored at room temperature. Once they are fully ripe, you should use them within three days.

The olive oil acts to provide just the right measure of "binding" and moisture to the salad. Adding green beans provides both nutritional benefits and color to the dish. Often referred to as French or string beans, they are actually the unripe fruit of many types of beans. In the U.S., they have been bred especially for fleshiness and sweetness. They are loaded with a host of vitamins.

This recipe is easy to make and produces a nutritious, versatile and flavorful dish that makes an excellent leftover, which can be served for lunch or a light meal the following day. 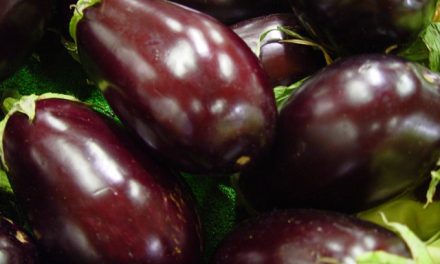 Can You Trust the Claims on Food Labels?