Adjuvant chemo- or endocrine therapy: use of anti-cancer drugs in addition to primary treatment to delay or prevent a recurrence.

Aspiration biopsy: removal of cells in fluid or tissue from a cyst or mass by means of a hypodermic needle and a syringe (instead of surgery) for microscopic examination and diagnosis.

Axilla: the underarm area (armpit); or "axillary," the adjective referring to the lymph nodes in this area.

Benign lesion: a non-cancerous growth which does not spread to other parts of the body.

Biopsy: removal of suspicious material for microscopic diagnosis. Can be aspiration by a needle to remove cells (see above), can be removal of a tissue sample by a "core" needle, or surgical removal of part or all of the lesion.

Cancer: a general term for more that 100 diseases characterized by abnormal and uncontrolled division of cells. Cancer cells can invade and destroy surrounding normal tissue, and spread by blood or lymph fluid (the clear fluid bathing body cells) to start new cancers in other parts of the body. (These are called "metastases".)

Carcinoma: cancer which, in the breast, begins in the lining or covering of lobules or ducts.

Carcinoma "in situ": cancer which has not spread beyond the place where it began in a breast lobule or duct.

Clinical trials: studies with groups of patients of alternative ways to treat--or with healthy women, of ways to prevent--cancer. Usually half the group gets one treatment, the other half another (or no treatment).

Cyst: a usually harmless fluid-filled mass. The fluid can be removed by aspiration with a fine needle and examined by a pathologist to be sure.

Diethylstilbestrol (DES): a synthetic female estrogenic hormone which has been linked with cancer growth.

Dissection: surgical operation which cuts and separates tissues. In treating breast cancer, the word usually refers to removal of the axillary lymph nodes and vessels.

Ducts: tubes in the breast which pass milk from the lobules, where it is made, to the nipple.

Endocrine therapy (hormonal therapy): treating breast cancer by changing the hormonal balance of the body instead of using cell-killing drugs.

Estrogen: a female hormone, produced by a woman's ovaries and adrenal glands. Scientists have shown a strong relationship exists between estrogens and breast cancer.

Estrogen dependent: a cancer needing this female hormone in order to grow.

Estrogen independent: a cancer which grows without this hormone.

Estrogen receptor assay (ER): a test to see if a breast cancer needs estrogen to grow.

More from our magazine:  Tips for Talking to Your Doctor

Gynecologist: a doctor who specializes in treating diseases of women's reproductive organs. Gynecologists may also have special training in breast disease.

Hormones: special chemical produced by glands in the body which circulate in the blood stream and control actions of cells and organs. Estrogens are hormones which can affect cancer growth.

Lesion: an abnormality in the body; an abnormal mass or group of cell in the breast that might be either fibrocystic and benign, or a cancer.

Lobule: a part of a breast lobe (a woman's breast has 15 to 20 lobes where milk is produced).

Lumpectomy: a surgical procedure in which only the cancerous tumor is removed along with a margin (or rim) of normal tissue. An excisional biopsy is the same procedure.

Lymph nodes: bean-shaped structures scattered along vessels of the lymphatic system. The nodes act as filters, collecting bacteria or cancer cells that may travel through the lymph system.

Magnetic resonance imaging (MRI): a technique in which atomic elements of body cells are made to react to powerful magnets and radio frequency signals. Measurements of the reaction are converted by a computer to cross-sectional images in which the internal body structure is clearly shown. (Now being studied as a tool for breast cancer diagnosis.)

Mammography (mammogram): X-ray imaging of the breast with equipment designed especially for this purpose. Frequently, mammograms can show lesions in the breast too small or too deep to be felt in a manual examination.

Metastasis: the spread of cancer from the first tumor to another part of the body.

Modified radical mastectomy: a surgical procedure in which the breast and the lymph nodes in the armpit are removed while underlying chest muscles are left intact.

Palpation: examining with the hands to feel what is under the skin. A "palpable" breast lump or thickening is one that can be felt by pressing on the surface of the breast.

Partial or segmental mastectomy: a surgical procedure in which only a portion of the breast is removed, including the cancer and a surrounding margin of healthy breast tissue. (This may be the same as a lumpectomy.)

Pathologist: a doctor who identifies or diagnoses diseases such as breast cancer by examining cells and their surrounding tissue under a microscope.

More from our magazine:  Menopause: A Natural Step in a Woman's Life

Progesterone: a female hormone, produced by the ovaries only during a specific time of a woman's menstrual cycle. This hormone is needed to mature the egg and prepare the uterus for a possible pregnancy. Menstruation occurs after the secretion of progesterone stops.

Prognostic indicators (also called "markers"): characteristics of breast cancer used to predict whether a recurrence is highly probable or not.

Radiation therapy: in the case of breast cancer, after the tumor is removed, treatment of the entire breast using high-dose X-rays to kill any cancer cells left behind. Sometimes tiny amounts of radioactive material in small tubes also are temporarily placed in the breast; this is "implant" radiation.

Radical (Halsted or standard) mastectomy: an obsolete surgical procedure in which the entire breast, the chest muscles underneath and the lymph nodes in the axilla are removed.

Reconstructive mammoplasty: a surgical procedure (plastic surgery) to recreate the contours of a lost breast by means of an artificial implant placed under the skin or by transplanting a woman's own tissue from another part of her body.

Recurrence: return of cancer growth either in the same general area of the breast as the primary tumor (a "local" recurrence) or as metastases in other parts of the body.

Staging: certain tests and examinations, including classification of the primary tumor, lymph node involvement and other tests to see if the cancer has metastasized before starting any type of definitive treatment.

Tamoxifen: an antiestrogenic drug which acts to block the growth of breast cancer tumors whose cells depend on estrogen to divide. Tamoxifen is a "cytostatic" drug: it prevents tumor cells from dividing but doesn't kill them.

Total (or simple) mastectomy: a surgical procedure involving complete removal of the breast but not the axillary lymph nodes or chest muscles.

Ultrasonography (ultrasound): a technique using high-frequency sound waves for imaging the contents of the breast or other parts of the body based on the principle that tissues with varying densities reflect, or "echo" sound waves with different intensities. Echoes are converted to photo images that can be seen on a TV monitor or film as a "sonogram".

X-rays: radiation which is used, at very low doses, to detect abnormalities and cancer (e.g., mammography); or, at the very high doses used in radiation therapy, to destroy cancer cells that create malignant tumors.

High Blood Pressure: What it is and What Happens When it’s High 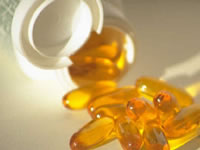 How Much Vitamin E Is Enough?

Not for Your Eyes Only