Rhubarb: Not Just For Pie Anymore

In an era when people chatted over the fence rather than the Internet, back yards had rhubarb patches. They may not exist in many home gardens any more, but there is a big commercial industry to supply the demand for rhubarb, from early winter through early summer, with a peak from April to June.

Although rhubarb has traditionally appeared in desserts, it is now turning up in soups, stews and other savory dishes. Chefs use its tart, piquant flavor to add a bright note to many dishes as well as sauces.

Rhubarb has been around for about 4,000 years, but used as a food only for the last few hundred. Native to Northern Asia, rhubarb was used for centuries for medicinal purposes. The first recipe using rhubarb has been traced to the 1783 "The London Art of Cookery," which suggests slicing the stalks and cooking them as you would gooseberries.

The word rhubarb has even found a place in sports writing and, therefore, colloquial English, to describe an acidic, bitter dispute. It was originally a theater term: actors in mob scenes would say "rhubarb" over and over to simulate the angry, confused sounds of a mob.

When shopping for rhubarb, look for firm, crisp, unblemished stalks with a lot of pink or red color. Field-grown rhubarb, which has more pronounced flavor than the hothouse variety, is cherry red, while the latter type is pink. The leaves should be fresh looking and blemish-free, but, because they contain toxic oxalic acid, they should be discarded when the stalks are prepared for cooking.

More from our magazine:  Reinventing Ratatouille

Rhubarb is highly perishable. If you're not using it right away, wrap the rhubarb in plastic and refrigerate - but not for more than a few days.

A Wonderful Casserole to Welcome Autumn 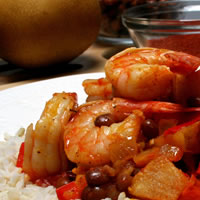