Soy Is Still a Puzzle

A recent study of women in a cancer risk assessment program highlights the confusion people still have about soy foods.

This difference in opinion is understandable because the evidence is still inconclusive. Several types of studies suggest that soy could help lower the risk for at least some cancers.

For instance, the low risk that Asians have for most cancers may stem from their lifelong use of soy foods. Laboratory studies also show that soy’s estrogen-like phytochemicals can bind to estrogen receptors. This activity could possibly block estrogen’s breast cancer-promoting effects. In other studies, soy phytochemicals inhibit the growth of prostate cancer cells.

Soy also appears to protect a person in studies that compare soy intake between people diagnosed with cancer and people who are cancer-free. Those who ate the most soy, which ranged from several servings a week to once a day, had a 25 to 50 percent lower risk of prostate, breast and uterine cancers.

In some cases, however, the link between soy consumption and lower cancer risk disappears when the analysis figures in the impact of weight control, vegetable consumption, limited meat intake and regular exercise.

More from our magazine:  A French Classic: St. Tropez Ratatouille

Cancer survivors are often highly concerned about soy’s effects on cancer recurrence, yet the evidence on soy for this group is also inconclusive.

Research presented at the American Institute for Cancer Research (AICR) international conference showed that the Prostate Specific Antigen (PSA) count, which can identify prostate enlargement or cancer, dropped in 34 percent of a group of men, after they ate soy protein daily for eight weeks.

Some researchers, however, worry that the weak estrogens in soy’s phytochemicals could stimulate the development of precancerous cells or malignant cells of estrogen-sensitive cancers like breast cancer. This is a very difficult theory to test, but a few laboratory studies suggest there may be grounds for concern.

Part of why it’s so hard to identify soy’s influence on cancer risk may be that its benefits depend on when it is consumed. In several population and laboratory studies, much of soy’s protection against breast cancer comes when it is consumed before or around puberty. At this age, soy appears to affect how breast tissue develops. If women start consuming soy later in life, its benefits may be more limited.

For now, most researchers say it is reasonable for everyone to include soy foods as part of a balanced, mostly plant-based diet. While cancer-prevention benefits are uncertain, these foods offer a healthy amount of protein, fiber, vitamins and sometimes calcium with little saturated fat.

Although soy foods are often suggested for their phytochemicals like genistein, the impact of traditional soy foods such as tofu, soy nuts and soymilk are probably quite different from the effects of soy supplements or a bar containing corn syrup, vegetable oil, chocolate and soy protein When you consider any food’s nutritional value, you should focus on more than its phytochemical content.

More from our magazine:  Marinated Artichokes Fit For a Star

Whether or not soy reduces the chance of cancer recurrence, most researchers think soy foods are safe for cancer survivors to eat anywhere from once a day to several times a week.

For more proven cancer protection, however, cancer survivors and everyone else should concentrate on reaching and maintaining a healthy weight, exercising regularly, and eating a mostly plant-based diet centered around vegetables, fruits, whole grains and beans. 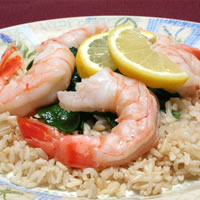